The Jet d’eau: a symbol rich in history

Invented almost by chance, the Jet d'Eau embodies the ambition, dynamism and international renown of a city that is respectful of its environment. Discover the history of this symbol of Geneva through guided tours organised by SIG.

Since 1891, the Jet d'Eau has been enlivening the heart of Geneva. As the owner of this water monument, SIG ensures its ongoing operation and maintenance.

At the end of the 19th century, Geneva craftsmen used to the energy generated by a hydraulic plant located on the Rhone to operate their machinery. To release the excess pressure that built up during the evening time when any activity had ceased, it was decided to create a valve – and this is how the Jet d’Eau was born, which only measured a “mere" 30 metres.

A few years later, the City of Geneva decided to turn it into a tourist attraction. The Jet was then moved to the end of the Eaux-Vives wharf, in the centre of the bay.

It was not until 1951 that the Jet d’Eau reached its current size of 140 metres. This technical feat was made possible by building an autonomous pumping station.

To celebrate awareness-raising, humanitarian or promotional events of international Geneva, the Jet is adorned with the most beautiful colours that light up the heart of the bay.

Today, five volunteer SIG retirees watch over it to ensure its proper working order and to shut it down when weather conditions require it, be it when temperatures drop to around zero degrees, when the wind is too strong, etc.

The Jet d’Eau in images

Admire the Jet d’Eau in video via the webcam installed on site! 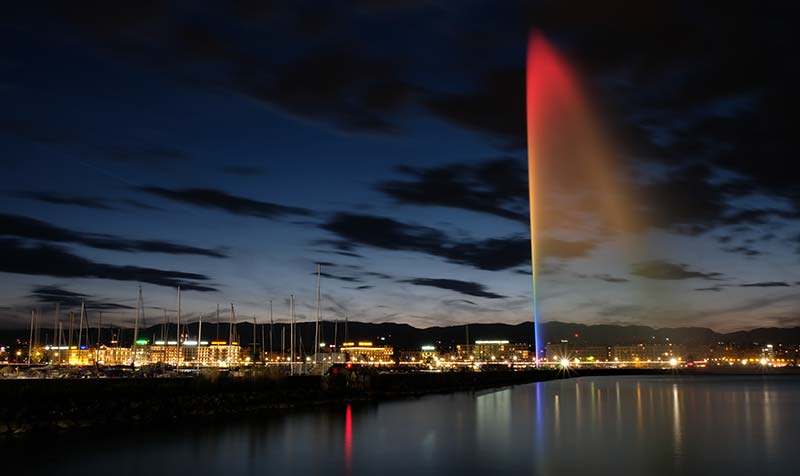 To support awareness, humanitarian and promotion events for international Geneva, the Jet d'eau is adorned with the most beautiful colours and illuminates the heart of the harbour.

These guided tours are suitable for companies, schools, organisations and public bodies.

They are organised for groups from 10 to 12 peoples. Recommended age: from 10 years old

Please note: Visits are unsuitable for persons with reduced mobility.

From 1 April to 31 October: every day of the week except Tuesdays.

Tours take place in the morning, one hour before the Jet is switched on (see schedules).

Tours are free for schools, organisations and public bodies.

Once you have filled out  our form, you will receive a confirmation e-mail.
For more information, contact us via visites.sites@sig-ge.ch, or at 022 420 85 81.

Where to find us